Here comes another Kazi review! I reviewed the Kazi Panzer IV a while back, if you have missed it do check it out!

The Tiger gave the Germans its first tank with a 88 mm gun. Used through the course of the war, the Tiger I saw combat on all German battlefronts. It was usually deployed in independent heavy tank battalions.

Kazi has come out with their version of the Tiger tank.

The Kazi Tiger Back Box Art

Again the men are anxious to test out the seats of their tank. Interior of the tank with a detailed engine.

A printed tile in this set -> On Off black and white indicator tile.

And the completed Kazi Tiger tank – Side View and comparing it with the real Tiger tank.. Accurate! 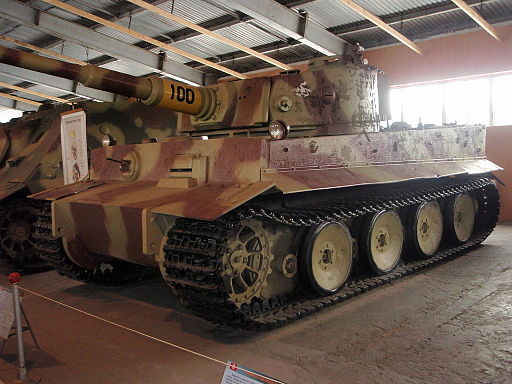 Kazi Tiger in Comparison to the Kazi Panzer IV. The Panzer IV is massive!

It took about 3 1/2 hours to get this tank assembled. It has the same problems with the Kazi Panzer IV tank.

The minifigs also came totally disassembled. Hands shoulder, torso,legs, hip and head, unlike LEGO minifigs which has the hands assembled to torso and legs to the hip. Overall it was surprising to see flesh heads in this series. They had no guns in this set which will be a good to have.

The parts in this Kazi Tiger kit is also ‘rough’ and brittle. During assemble parts like the tank wheels require extreme strength to push it in (or take out if you made a mistake), Other parts dont fit too well at times due to plastic over-moulding and require some cuts to get it to fit. There were no missing pieces and some extras bricks as well. The tracks have the same problem, it is hard to have the tracks move smoothly almost any surface.

Comparing the accuracy of the tank with a real life one, one can see the accuracy.  Again the placement of the men in the tank is wrong and they cannot squeeze through the 2 hatches. The size of the tank is huge compared to other brands and customs. If one can look past the quality of the bricks, definitely this will be a worthwhile set to add on to your collection too.

This site uses Akismet to reduce spam. Learn how your comment data is processed.